Working on a 1938 Presto recording lathe, we record contemporary musicians who are inspired by music of the past. Musicians are given a 10″ lacquer disc to cut their 78 record live in one take, using a single microphone. The audio mix is achieved through performance and positioning. The result is an authentic recording that is difficult, if not impossible to achieve with digital software.

“That’s the sound we’ve been trying to find for over a decade.” 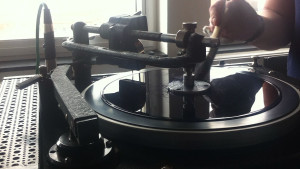 Reviews for the 78rpm album

“…the album’s a marvelous reincarnation of the glory days of early music.” Acoustic Magazine, March 2016

“,,,this is not only a reprise of those far off days of early recordings but also a hugely entertaining  album of songs and instrumentals in its own right, made by musicians of the highest quality…” American Roots UK

“What is your favourite album of this year?

I’d have to say ’78rpm’ by Sheesham and Lotus. It’s an absolute masterpiece.” The Holcombe Family String Band in Americana UK